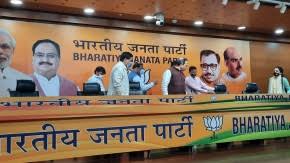 BJP Candidates List 2021: For the Assam Assembly elections, the Bharatiya Janata Party -BJP will contest from Chief Minister Sarbananda Sonwal from Majuli and Hemant Biswa Sharma from Jalukbari seat as last time. BJP has released the first list of 70 seats candidates. The party has not given tickets to 11 sitting MLAs.
Prafulla Kumar Mahanta, who was the Chief Minister of Assam twice, has been representing this seat since 1991. There is a discussion that Mahant can enter the electoral field from there under the banner of a regional party. Mahant is currently undergoing treatment in Delhi.

The BJP has taken the Berhampur seat from the AGP into its account and from there has declared Jeetu Goswami its candidate. In Assam, the BJP is contesting the elections in alliance with the Asom Gana Parishad (AGP) and the United People’s Party Liberals (UPPL). Under the alliance agreements BJP will contest 92, AGP 26 and UPPL eight seats.

Similarly, BJP has also taken Lakhimpur and Kamalpur seats from AGP. From Lakhimpur, Mahant’s close and former minister Utpal Dutt is an MLA, while Satyavrat Kalita of AGP is the MLA from Kamalpur.
The BJP has also given tickets to two former Congress ministers who recently joined the BJP. The party has declared Ajanta Neyoga candidate from Golaghat and Gautam Roy from Katigorah.